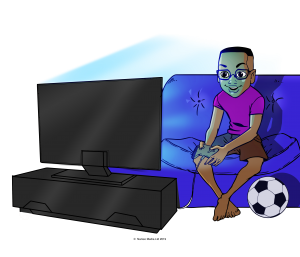 It was so unfair! Just when I was about to beat Sanjay’s score on our favourite video game, Amai (mother) announced that today is Digital Detox Day! I mean, COME ON!

That meant that no one was allowed on the computer, phone, TV, PlayStation or any other digital devices. It wasn’t just me – Naniso was not pleased either, the new series of her favourite dance TV programme started today!

Amainini Bevie, Amai’s sister found it all amusing. She is visiting for a few days and has kicked the football around with me in our small garden. She introduced us to a game called “Nhodo”, which has kept us occupied for most of the day. This game requires great hand-eye coordination and, as Naniso and I are finding out, is very competitive. You should give it a go! Here’s how you play.

Here’s how you play:

The player loses their turn if they:

The winner of the level is the player with the most pebbles at the end!

Repeat steps 1 and 2 above but this time sweep out more than two pebbles and leave two outside the circle when dragging the pebbles back.

Keep increasing the levels by leaving out more and more pebbles!

We had fun playing this game today, but we definitely can’t wait until this Digital Detox day is over!